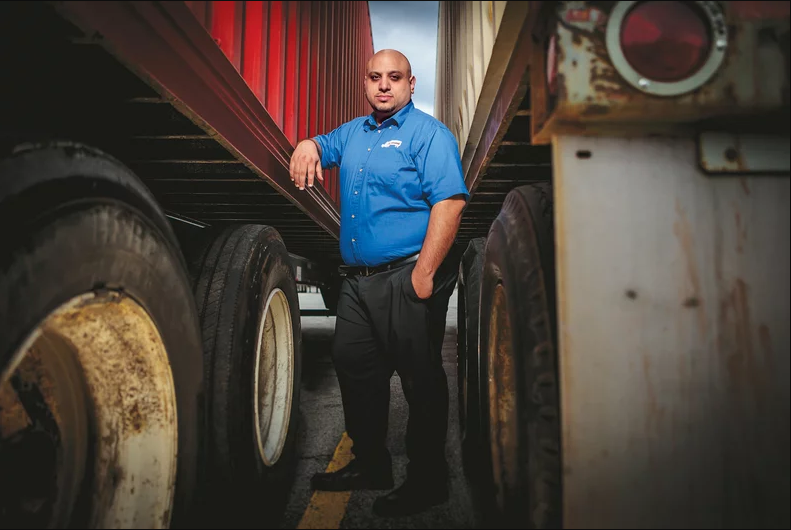 Last year Azmi Kiswani was hiring truck drivers to keep pace with shippers clamoring to move goods in a booming market. Now there’s too little freight to keep them all busy.

Kiswani is vice president at Kiswani National, a South Holland trucking company with nearly $30 million in revenue and 200 employees, 150 of them drivers. Around mid-February, the company saw volume drop, which was normal. But the flood of holiday merchandise that should have arrived by now hasn’t materialized, which isn’t. Drivers have been working just three or four days per week since March.

A suite of factors combined in 2018 to goose the freight market to record levels, from customers stocking up before tariffs took effect to new governmental regulation mandating electronic logging devices. Trucking companies across the country hired drivers and added trucks to meet the surge.

Shrinking shipments signal trouble ahead for the national economy, and Chicago in particular. Transportation and warehousing, including rail, truck and third-party logistics companies, employs nearly 230,000 in the region. A quarter of the country’s freight originates, terminates or passes through here.

A healthy economy and the growth of e-commerce helped fuel last year’s freight boom, says market analyst Peggy Dorf at DAT Solutions, an online freight marketplace. So did oil drilling that exceeded pipeline capacity, forcing that oil onto tanker trucks, plus shipments of equipment to extract it from the ground. Demand for drivers got a further boost from the rollout of electronic logging devices in December 2017, devices that force drivers to stop work after they’ve driven the hours allowable by law.

Shippers also scrambled to bring more goods into the country before tariffs on imports took effect in July and August, with more threatened by Jan. 1, 2019. (Tariffs eventually were raised to 25 percent on $200 billion of Chinese goods on May 10.) So trucking companies saw a bump as customers filled warehouses with goods they might otherwise have ordered in 2019.

With high demand and tight capacity, shippers paid up for space on trucks and rail cars. Spot market rates, the fluctuating prices that carriers charge shippers to move goods immediately, peaked at $2.32 a mile in June 2018.

Since then, oil industry shipments have slipped alongside oil prices, shippers with fully stocked warehouses have cut back on new orders and the one-time effects of electronic logging have played out. By last month, the spot rate had dropped 23 percent to $1.79 as a supply-demand imbalance weakened carriers’ bargaining power.

Railroad volumes declined 2.4 percent in the first five months of 2019, compared to the same period last year, according to the Association of American Railroads. The Cass Freight Index, which measures all domestic freight modes, shows shipments have dropped for five straight months, while data from the American Trucking Association shows over-the-road freight tonnage falling in February and March before rebounding in April.

Chicago-based freight brokerage Echo Global Logistics has seen its stock price fall 44 percent in the last 12 months since peaking at $36.75 in September, to $20.55. Chief Operating Officer Dave Menzel said on an April 24 earnings call that “capacity is relatively loose and overall demand has been muted.”

Not everyone is worried. In a note titled “The Death of Freight Has Been Greatly Exaggerated,” Cowen analyst Jason Seidl writes that 2019 is suffering from the comparison to 2018’s historic highs and comparisons to larger timespans “shows that the 2019 data isn’t nearly as bad as people are making it out to be.” Spot rates in Cowen’s proprietary index are negative year over year, but still up 5 percent against the index’s January 2017 baseline.

There’s also been outsize impact this year from the “extenuating circumstances” of trade and weather, Seidl writes. Supply chains are moving out of China to avoid tariffs, forcing companies to find new ports, new railroads and new trucking companies. Cold, wet weather has dampened the need to move produce, and “one can understand why the market for charcoal for barbecues or gardening supplies hasn’t been as robust as usual.” Seidl predicts demand will return to normal seasonal levels as the weather improves.

That would be good news to drivers like Ahmad Mohammed. Kiswani’s 28-year-old cousin has driven commercially for seven years. Employee drivers can make $1,500 a week, or $78,000 a year, he says, and drivers who own their own trucks make more. However, the U.S. Bureau of Labor Statistics puts the median annual pay for a tractor-trailer driver in metro Chicago at $49,000.

Last year dispatchers sometimes pushed Mohammed to take loads when he wanted to take the day off, so when the slowdown started, at first he enjoyed the break. That ended when the break stretched to a week, then two.

“Every week it’s, ‘We’ll see what happens next week,’ ” he says. “There’s just not enough loads to go around.”

Transportation sees the booms and busts before everyone else, Kiswani says.

“The recession was supposed to hit in 2020,” he says. “Could it be coming earlier? I think it is.”Letter

This article was first found at ChicagoBusiness.com and written by; CLAIRE BUSHEY